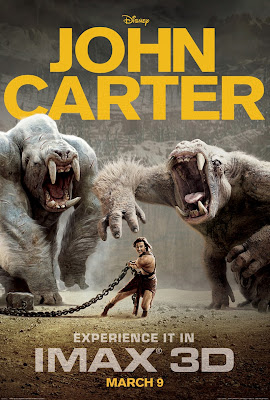 John Carter is an entertaining film that works towards a greatness that is never quite achieves. I had seen the trailer and it looked promising, but what interested me more was that it was the live action directorial debut of Andrew Stanton, director of Finding Nemo and Wall-E. I went primarily to support Mr. Stanton but since I am also a big science fiction fan and enjoy the fantasy genre I thought John Carter would be right up my alley.

John Carter revolves around the main character of John Carter (Taylor Kitsch) a former confederate soldier who is on the hunt for gold out in the American west during the late 1800’s. Through a series of events Carter finds himself in the possession of an object that transports him to Barsoom AKA Mars. Here he encounters a tribe of indigenous people, gets caught between warring factions, and saves a damsel in distress Dejah Thoris (Lynn Collins). During all of this John Carter is trying to get back to earth.

The films visuals are quite good. The CG elements are all well tailored for their purpose. The creatures, the vehicles, the world itself are all very impressive and create what feels like a complete alien world for us to explore as we watch the film. I don’t think any of the effects ever got to the point of being distracting or pulled me out of the film. I think that is perhaps the biggest compliment I can give any special effect these days. Beyond that the acting in the film is quite impressive the two leads Taylor Kitsch and Lynn Collins do an excellent job of portraying their characters. I was particularly impressed with Lynn Collins as Dejah Thoris. She feels like a real person that exists inside of this world. She has a lot more going for her than just being the counterpart to the hero of the film, which is a welcome thing to see.

While John Carter is entertaining it suffers the fate of many film adaptations of books in that the film attempts to tell a story far too large for the run time. Lots of great ideas are introduced but we as an audience are never given enough time to sit back and enjoy these ideas before the next great idea comes along to distract us from it. The ideas happen so quickly and things change gears so fast that a lot of the time I was barely able to keep up with what the motivations of the characters were. At times I was unsure of where these characters were going, and ultimately what the point of a lot of the on screen action was.

While the film has impressive visuals, some good acting and has a plethora of good ideas, these elements never come together in a solid way. Hopefully on the next film things can be simplified or more time can be given to let these great ideas be fleshed out. If that happens maybe we will be given time to absorb some of the wonderful places and ideas that are being shown to us as an audience. When I left the theater I have to say I was a little sad that a film which had so much promise failed to collect itself in time for its theatrical release. I think this is a film people should see at least once. But you might consider waiting and renting it.

Posted by AFightingPanda at 11:06 PM