So I have started a new shot, spent last night doing the set up, have a background and stuff so I had to actually build a couple of things in max. Which took awhile because I had to access a rusty part of the old brain organ. I actually was thinking about making a short film there for awhile and I think I have decided against it. However I did storyboard it out and there were a few panels that I really loved and thought would be really cool to do so, I decided to shelve the short and just do those couple of shots on my own. They should work out of context and be pretty cool to boot. I posed out one of the main poses so far and decided it was worth sharing just to give you a flavor of what is to come. 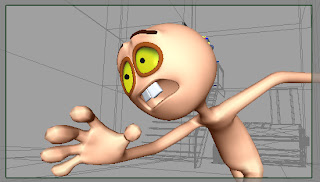 Posted by AFightingPanda at 8:01 PM