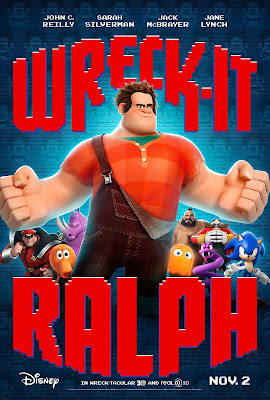 Wreck it Ralph is the newest animated film from Disney. It also happens to be very well done. After years of mediocre films Disney finally turned the corner with Tangled in 2010 a very strong film that fell within the princess films genre from Disney. Wreck it Ralph takes a completely different path but is just as entertaining and heartfelt. I think that Disney is turning the corner in a big way. If they can keep making animated films of this quality then they have a very bright future ahead.

The hardest part of describing Wreck it Ralph is describing the world. The characters in wreck it Ralph are video game characters. They exist inside their own worlds which are arcade cabinets. The characters can leave their arcade cabinets and visit game central station, a hub of all arcade cabinets in the video arcade. The story revolves around Ralph (John C. Reilly) a character from a game called Fix it Felix. Ralph is the villain of his game and is thrown in the mud at the end of every level as Felix the hero is given a medal. After not being invited to the 30th anniversary party of the fix it Felix game Ralph gets into an argument with some of his fellow game characters and says he is going to go out and get a hero medal just like Felix. Ralph leaves his game and goes to get his hero medal in another game. After finding a medal Ralph accidentally goes to another game where his medal is taken by Vanellope von Schweetz (Sarah Silverman) a glitched character from a game called Sugar Rush who uses the medal to buy her way into a race. Fix it Felix realizing that Ralph has left the game goes after him in an effort to bring him back to their game. The rest of the movie revolves around the relationship between Ralph and Vanellope and Felix trying to find Ralph and bring him home.

Wreck it Ralph has an amazing premise. This is a world that those in my generation are intimately familiar with but it is shown to us in a way we never expected. That makes us feel right at home as we get to know the characters, the locations, the worlds and rules of the new games that we get to see throughout the film. The Characters themselves are all amazingly fun and interesting. Ralph is a wonderful character that we feel for through the film; he is the emotional anchor that holds all the other characters together. He is the perfect looking glass to see this world from. Fix it Felix (Jack McBrayer), Vanellope von Schweetz, Sergeant Calhoun (Jane Lynch), and King Candy (Alan Tudyk) are all great characters that really flesh out the world and offer up a lot of fun and heartfelt moments throughout the film. The animation in the film is amazing as well; some absolutely amazing work was done throughout the film. The design work was great, jumping from game to game opened up a lot of different design possibilities to explore and all of them were fantastic. Going from world to world was simply a visual treat.

The film is great and I really love it. If there was one thing that I could say was weak it would be the fact that the story and themes that the film uses have been done so many times that it made it a little tiring to see again. How many times can the idea of being yourself and finding happiness in your own world and situation be explored before it gets tiring? Putting fresh jokes, interesting, characters, and a lot of visual flare on top helps, but the fact remains that the core structure of the film has been done so many times that there is very little excitement left to be had. Basically the core of the story feels fairly tired. I don’t want to give the impression that the story itself is bad, its not. It is just that there are very few surprises to be had through the film and as an audience you will probably know where its headed.

I think that this film is a heck of a lot of fun. Great characters, an interesting world, and some really great jokes makes this a must see for almost everybody. The couple of complaints I had about the story won’t bother most people and are more ambient complaints of films that have come out over the last decade or so. I think that Disney has really developed a wonderful film here and I want to say congratulations to everyone that had a hand in creating this film. It’s a wonderful time at the movies and I don’t think anyone will regret seeing this one in theaters. GO SEE IT!

Posted by AFightingPanda at 11:45 PM

Disney Animation has almost cracked the PIXAR code entirely to make their movies on par with theirs.