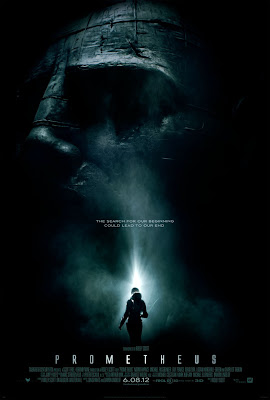 Ridley Scott returns to the science fiction genre after 30 years with his new film Prometheus. When the production of this film was announced to the public a couple of years ago it was sold as a prequel to Scotts sci-fi horror epic Alien (1979). While that may have been the original intention it seems that over the development process things changed. I won’t say that the drift away from the Alien was a completely bad thing though. Ultimately the film audiences have received is only loosely tied into the alien story but still has the world and the tone that so clearly personified the first Alien film.

After years of research and archeological discoveries Elizabeth Shaw (Noomi Rapace) and Charlie Holloway (Logan Marshall-Green) have found a series of hieroglyphics created by several ancient and remote tribes of people all over the earth. These hieroglyphics all show the same pictogram of people worshiping a pattern of dots in the sky. This pattern aligns perfectly to a star system so far away from earth that these primitive people could never have found this solar system by themselves. After looking at the solar system it was shown that one of the planets had a moon with the capability to support life. The ship Prometheus has been sent to this planet in order to see what if anything is on this alien planet.

The film overall has a sense that we have been here before. Themes are explored that have been done in other films more thoroughly and there seems to have been some confusion on the part of the film maker as to which direction to take the film. There are two or three different ideas that the film tries to juggle at any one time. Now while it works to a certain level it just seems unnecessary. I can clearly think of one entire story thread that could have been removed without affecting the rest of the film. That is valuable time which could have been spent developing these other ideas to be stronger, more interesting, and ultimately more worthwhile to the story. The film has Ridley Scotts clear brand of horror and suspense science fiction filmmaking. While that is a benefit most of the time a lot of the elements of the film particularly the pacing, and the build up to large events is very similar to Alien. That being said if you have seen Alien then the surprises probably won’t have as much punch and the dynamic between the characters is going to be clear and evident from the start. More than a couple times there were moments where a large revelation happened but by that point it wasn’t a surprise simply because it felt like the clear choice that Ridley Scott would make.

The main thing I think that is a benefit to this film is simply the world that Ridley Scott created; it was a clear benefit to the overall feeling of the film. You never get the sense that anything is off or shouldn’t be working. Everything seems real and tangible and we never feel that the film makers quickly threw something into the background to fill space. This fleshed out world really allows us as an audience to let ourselves get pulled into the story of the Prometheus crew and their mission. Speaking of the crew, some of the performances were absolutely wonderful. Michal Fassbender as the robot David was a pitch perfect performance all the way through the film. Everything from the way he moved to the way he spoke worked perfectly for the character. Noomi Rapace as Elizabeth Shaw was also a great performance. She is the anchor that drives the film forward and we get a very clear arc and development of her character through the film. It doesn’t hurt that she manages to get a couple of the most interesting and terrifying scenes in the film. Overall the performances in the film are excellent with some great supporting roles done by Charlize Theron as Meredith Vickers and Idris Elba as the ships captain Janek. Besides the performances the special effects were absolutely on point through the whole film. From the landscapes of the alien planet to the ship as it flies through space, it all looks great. The musical score was also a solid addition to the film with a perfect blend of wonder and an impending sense of doom. So much is said with just the score that I could not write this review without mentioning it.

Overall the film is entertaining. It has a nice blend of suspense and action with some great performances and awesome visuals. While the film has a certain amount of been here done that feeling if you are a fan of Alien or of Ridley Scott you won’t be disappointed. Just don’t expect to be blown away either. Ultimately I feel like this film is very solid, I am only disappointed that it could not have been streamlined and polished to become the sci-fi classic that is clearly visible in the film but never materializes. If you like sci-fi horror and action then go see Prometheus it’s a good time at the movies and another solid summer blockbuster under our belt for 2012.

Just got done watching it and I can’t say I was all that impressed with what I saw. Yeah, it had its moments that were tense and a little freaky but it never fully got off the ground for me. However, it’s a beautiful film the whole way through and one that should definitely be seen in 3D no matter wherever you may be. Good review Keith.

I have heard very mixed things about this. I am glad you liked it enough to give it 4/5 and not 3.5/5. This along with Moonrise Kingdom were and still my most anticipated movies of the year.

I am a somewhat new blogger, can you check me out please? http://moviereviewer96.wordpress.com/