Not much to say about this video! I talk about some animation stuff, some film theory stuff, so design things. Just a really neat little section of interaction shots. Hope you guys enjoy it!
Posted by AFightingPanda at 1:42 PM No comments:

My new series continues! This time I talk about a couple of shots from Tarzan. I talk a lot about visual shapes this time and design elements which all go into creating appealing poses.
Posted by AFightingPanda at 12:00 AM No comments:

Hey everyone! It has been a very long time since I posted anything but I decided I wanted to start a new series of videos where I break down some animated shots and just talk about what I love about them. These are much more off the cuff and unorganized than my other videos but they are a lot easier to do. Anyway! I hope you guys enjoy it and feel free to ask some questions if I was unclear about something.
Posted by AFightingPanda at 9:48 AM 1 comment:

So this is just me playing around and quickly doing something with the new Zoey rig from ianiamte. I decided I wanted to focus on the face and do some basic facial acting. So, I just came up with this. Spent a couple days on it, so not too bad time wise but I know I can do better.
Posted by AFightingPanda at 2:15 AM No comments:

Movie Review: How to Train Your Dragon 2 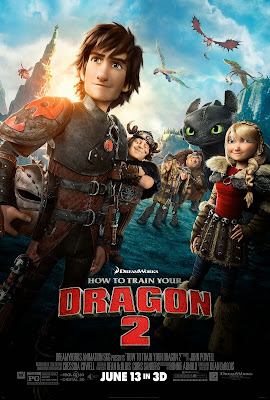 After the sensation that was the first How to Train Your Dragon in 2010 Dreamworks has returned with the highly anticipated sequel. Dreamworks continues their overall trend towards greatness with this film. While I don’t think it quite matches up to the original in all aspects it still hits incredibly close to the mark.

It has been five years since we have last seen Hiccup (Jay Baruchel) , Toothless, and the village of Berk. We catch up with Hiccup and Toothless exploring the world the Vikings inhabit like they never were able to before. Mostly in an effort to avoid Hiccups father Stoick (Gerard Butler). At the same time in Berk we are getting to see just what has happened to the village under siege from the last film. The village has boomed since we last saw it. More magnificent and lavish than ever before, the addition to a giant windmill to the town and several fancy new houses adorn the islands face. We get to see the harmony that the people of Berk and they dragons they care for have created. Living, working, and playing together. All is not well though when Hiccup and Astrid (America Ferrera) run into a band of dragon bounty hunters lead by a Viking named Erit (Kit Harington). These bandit Vikings are searching the islands looking for dragons to bring back to Drago Bludvist (Djimon Hounsou) a treacherous man who is creating an army of dragons and will not stop until all dragons are under his boot heel. Hiccup has to work to stop this menace in any way he can. Gaining new allies and learning some new tricks along the way.

There are just so many things about this film I absolutely love. The first thing that struck me was the lavishness of everything. The amount of detail, and love put into every object in this world is breathtaking. I didn’t think the world could get that much better compared to the first How to Train Your Dragon but I was amazingly wrong. The detail in Hiccups new helmet and Gobbers (Craig Ferguson) new assortment of hand replacements is stunning. The new dragons are a lot of fun and really flesh out the scale of the world with new shapes and designs we have never seen before. There are many moments when the dragons really steal the show, which is great! The animation and effects are top notch as well. I kept noticing a lot of great throw in gags by the animators. Little ways that they added to the shots or kept the characters alive and interesting as the scenes progressed. The effects too were just superb the fireball effects are still here from the last film but more surprisingly there are some ice effects that really blew me away each time they were implemented. I also need to take a moment and really express how amazingly happy I am about the decision to age these characters up five years. It tends to happen that studios do sequels so that they can save money and not recreate characters from scratch, it enables a cost savings will still leaving a lot of things open to be creative with. I understand the logic of it and I think that is why I am so surprised that Dreamworks went to such length as to redesign the characters to be more age appropriate. Hiccup, Astrid, Snotlout (Jonah Hill), Fishlegs (Christopher Mintz-Plasse), Ruffnut (Kristen Wiig), and Tuffnut (T.J. Miller), were all aged up and for the most part look really great with their new designs. Lastly the villain of the film Drago Bludvist is incredibly interesting, in his creative execution. Everything from his look, to his mannerisms, to his way of speaking all creates this incredibly vivid villain for the story to revolve around. This villain is pure and simply, no conflicted emotions with this guy, each time we see him he is either plotting or doing something really terrible. That kind of characterization is generally seen as lazy in story terms but the character is just so dynamic I never cared while watching the film and put him as one of my favorite villains of recent years.

After saying all that is there anything I didn’t like? Well of course. There are a few things that bothered me throughout the film. The main one being that Astrid seems to have been pushed off to the side story wise. She played such a huge and integral part of the last film that seeing her relegated to more of a supporting role away from Hiccup almost entirely was a bit of a let down. The scenes that Hiccup and Astrid are together are really wonderful and reminded me of the amazing fun we had on the first film, I just wanted there to be so much more of that. Speaking of Astrid I feel like her age update was clearly the weakest of them all. They really messed with her proportions. In the first film she was a really styleistic character. She had very cartoon proportions which worked perfectly in the style of the world they had created. In this film they updated her to be MUCH more realistic in terms of her proportions both physically and with her facial design. I feel like her facial design was the biggest let down. They reduced the size of her eyes a lot (or so it felt) which made her feel older sure, but it also made her feel like a different character. Through the whole film I felt as if I was watching a live action film where they replaced the actress who played Astrid. I already said the dragons were amazing in the film and they were. All the principle dragons created for the film were absolutely amazing. But a lot of the background dragons seemed to have incredibly pushed color pallets. Some of these dragons looked more like sports cars than they did dragons. We of course want brightly colored dragons in the film; it creates a sense of visual interested and depth. But when I can only stare at the bright purple dragon in the corner of the screen because it is so brightly saturated it brings me out of the film and away from the characters and story. I am not saying this was a huge problem but it was persistent and present through large chunks of the film. Lastly I will say that the absolute biggest problem I had with the film, isn’t a problem with the film at all. The very first trailer released for the film several months before the films release absolutely spoiled a gigantic story beat in the story. That is incredibly unfortunate, because while watching the film I saw an incredibly gripping and engaging sequence which would have been super impactful had I not already known what was about to transpire in the coming scenes because of the trailer. I feel like had I not seen that trailer I would have enjoyed the movie that much more. Lets be honest too, this film is the sequel to one of the most successful animated films ever. I feel like they didn’t really have to show much at all and the tickets would have pretty much sold themselves. Having them spoil a major plot point in the film was not only unnecessary but also really disappointing as a movie goer.

How to Train Your Dragon 2 is a great time at the theater. The story moves along at a good clip and never once did I feel bogged down by any one scene. While the sense of adventure and discovery is a bit lost with this new film the new things we get to see and experience certainly fill that void. It feels more like an evolution as opposed to a continuation of a story line, which is interesting but feels organic and allowed the storytellers to really branch out and tell a really dynamic story with a lot of heavy, heartfelt, and thrilling moments. The new dragons are great to watch and be surprised by and the scale is larger than ever if you can believe that. I cant imagine anyone not going out and seeing this film, it’s a ton of fun and worth every penny at the box office. What are you still reading this for? Go to the theater!

Posted by AFightingPanda at 5:00 AM No comments: